There is a kind of vulnerability that uses the flaw of whitelist applications in ElevationPolicy settings to accomplish sandbox bypass. A DragDrop policy setting similar to ElevationPolicy in the IE registry attracts our attention. In this post, the writer will try every possible means to break IE sandbox from the perspective of an attacker by analyzing all obstacles ahead to detail the drag drop security policy of IE sandbox.

Among all IE sandbox bypass techniques, there’s one that uses the issue of whitelist applications in ElevationPolicy to execute arbitrary code. In the registry, there is a configuration called DragDrop similar to ElevationPolicy. The specific registry path is:

As shown in the figure:

Here are the meanings for values of the DragDrop policy:

0: If the target window is not valid DropTarget, reject;

1: If the target window is valid DropTarget, but cannot copy contents;

2: Use popup to ask for user’s permission. If allowed, copy contents; to the target window;

In a clean Windows 8.1, there are 3 applications under the DragDrop directory by default: iexplore.exe, explorer.exe, notepad.exe. The policy value for each is 3. When the policy value of the target application is 2 and drag a file to the target window, IE would pop up a prompt like this: 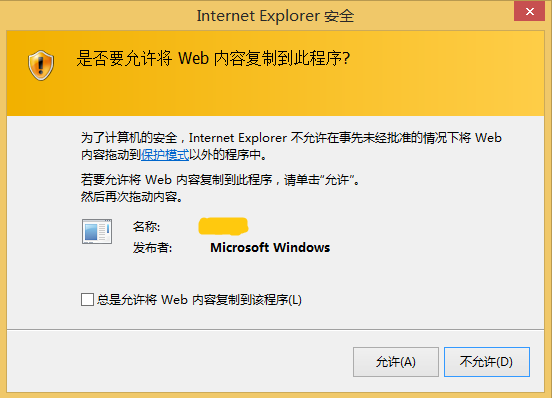 When drag files from IE to Explorer, although the DragDrop policy value is set to 3, IE won’t pop up anything, but the Explorer process will pop a prompt like this: 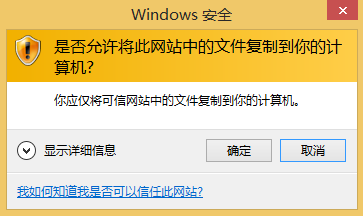 Of course, when we drag files from IE to the tree folder structure of Explorer’s sidebar, no prompt will pop up. This may be an imperfection in the implementation of the Explorer application. In second thought, if we can simulate mouse operations of drag and drop in IE sandbox, we’ll be able to use this Explorer issue to cross the security boundary of the IE sandbox.

OLE dragdrop is a generic file dragging method. It uses the design for OLE interface to implement the drag and drop operations, making it generic and modular. The OLE dragdrop technique includes three basic interfaces:

This figure describes the key components required by a complete OLE dragdrop operation: 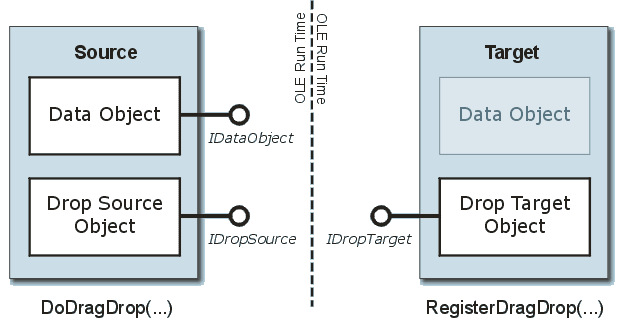 To simulate the drag and drop operations of a mouse, all we need is to implement IDropSourceinterface and IDataObject interface. The core of normal OLE dragdrop operation is to call the ole32!DoDragDrop function, here is the function prototype:

To simulate the dragdrop operation from a mouse by using code emulator, that is to isolate the GUI operation part from the DoDragDrop function, find the function that does dragdrop operation, pass the required parameter to it to finish the operation. In the case of ole32.dll 6.1.7601.18915 in Win7, I’ll illustrate the internal implementation of DragDrop.

Here is the main logic of Ole32!DoDragDrop:

The next While loop will determine the dragdrop status. At last, CompleteDrop will complete the operation, the key function call is like this:

As it can be seen, it’s the ole32!PrivDragDrop function that finally does the dragdrop operation, by using the hardcoded offset of the function address to call the internal function in ole32.dll. We define a DropData function to simulate the dropdrag operation from the mouse, the input parameters of which are the target windows handle and the IDataObject pointer of the file being dragged, the main logic is as follows:

The target window handle can be obtained through the FindWindow function. There are two methods to pack a DataObject and get the pointer of its IDataObject interface:

The writer explains how to use MFC class library to pack a DataObject and get the pointer of its IDataObject interface, here is the implementation code:

IE sub process (inside the sandbox):

For the first method, since we are in the sandbox, we can only use the proxy for Broker interface to get out of the sandbox and get in the process space for the IE main process. So we cannot call the internal function of the dell in the main process, further, this method is not feasible.

The second method, if we can change the position of the mouse, then inside the ole32!DoDragDrop function, we can use mouse position to get information on the target window. However, during experiment, we notice that it’s not possible to change mouse position through API inside the sandbox. The next case will illustrate this problem.

The writer can think of two ways to change the mouse position:

This hook is easy to bypass, we’ll directly call NtUserSendInput, but this function has no export, that’s why it’s required to hardcode its address through function offset. Directly calling the NtUserSendInput function, it returns no error, but the position of the mouse doesn’t change. Because the failure of the call is caused by the limits of UIP(User Interface Privilege Isolation). It’s the same when calling the SetCursorPos function.

UPI is a new security feature since Windows Vista, it’s implemented in the Windows kernel, and the specific position is as the following:

In Win8.1, this is the logic of the function:

Thanks Wins0n for helping me with ole32 reversing and FlowerCode for helping with my thoughts and solving difficulties.